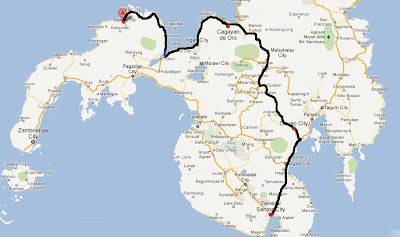 I was in GenSan when my colleague told me that he will be in Dipolog City the following week. He told me that they wanted to explore the northern part of Mindanao especially the famous Dapitan City. Its been my long  desire to visit Dapitan, but considering where I am is the problem. After long deliberation with myself (monologue style), I decided to go there and I have to travel and cross Mindanao south to north. Because there are no direct flights from GenSan or Davao City to any part of northern Mindanao and to minimize transportation costs, I have to go by land. I researched for directions, mode of transportation and fares from my friends, colleagues and even google on how to get there in fastest and safest way possible. Fastest. I have to get there on time or else I will be spoiling their time. Safest. As most of us know that there are some place here that are risky to travelers especially traveling nighttime. And this was it, my long, tiring but one kind traveling experience...

Roamed around the city of GenSan visiting park and malls (GenSan has several malls including SM, Gaisano, KCC and Robinsons). Then night time "gimik" with friends at Dolores Tropicana Beach Resort at Brgy Tambler.

020312 Sat 1000H
After all my bags were packed and "Halal" breakfast at Timuan Fastfood, I rode a tricycle to Bulaong bus terminal and took a "one-stop" bus bound for Davao City. I reached Matina at around 2Pm. According to my gathered info, it is safer to travel from Cagayan de Oro city to Dipolog during daytime. Since It will took about 8 hours from Davao to CDO, I should travel at around 9Pm in anticipation of my connecting trip from CDO to Dipolog. I spent my waiting time at NCCC mall at Matina until 8Pm.

2100H:
I was at Ecoland Bus Terminal. Bought a ticket and learned that the bus will depart at 10pm. For additional info, I inquired travel details from the bus conductor and told me that we can reach CDO around 6 am.

020412 Sun 0530H
Arrival at Agora Integrated Bus Terminal in CDO. This is the East Bound terminal of CDO. Since Dipolog-bound buses were on the West bound terminal, I have to travel to Bulua Bus Terminal. It took around 10 minutes ride in a tricycle for 50 Php fare. There were also taxis waiting outside but considering the cost of fare, tricycle was more suitable.

0800H:
Rural Tours Bus departed CDO bound for Dipolog. I thought the trip was by land all the way to Dipolog but at around 12Noon the bus stopped at Mukas port in Kolambugan, Lanao del Norte and all passengers were instructed to go down. Only that time I learned that will be going to ride a ferry to Ozamiz  city. After I bought a ticket, I went aboard the ferry and luckily there was a tv set broadcasting the fight of Donaire that I much waited to see. (I am a Donaire fan). But the sea trip was only about 20-30 minutes( depending on how the ship will be maneuvered), frustratingly, I was not able to see the fight. I think It was only on the 2nd undercard, we already reached the opposite port of Ozamiz. From Ozamiz another land travel to Dipolog.

1600H:
After a very long and tiring journey, I reached Dipolog city safe and sound.