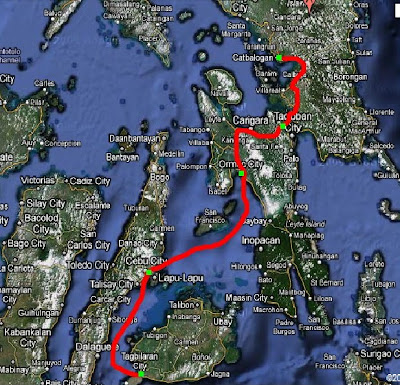 Afternoon of July 23, 2010, after a successful training in Maqueda Bay Hotel in Catbalogan City, Samar, I boarded a public utility van (Grand Tours)to Leyte's capital, Tacloban City. I spent a night in the regional office for it's dangerous to travel at night considering the distance and terrain of the area. It takes 2 and a half hours travel from Catbalogan to Tacloban. Five o'clock in the morning when i woke up.

After packing up my things I went to the Duptours terminal and boarded a coaster( larger than van) to Ormoc city. The coaster departed at around 7 am and we arrived at the pier of Ormoc at around 10:30 am. I immediately bought a ticket but only to know that the latest trip had just left minutes ago and the next trip will be at 1:30 pm. There's nothing I can do but to wait.

In order for me not to be bored I roam around the city and take my lunch at the usual fastfood resto, Jolibee. I went back to the pier at around 12:30 pm, and after waiting for an hour the fastcraft has arrived and the PA system announcing the arrival of Wessam seacraft from Cebu..to all passengers to Cebu, Please wait for further instruction before boarding the seacraft, thank you." Then after a while.."To all passengers to Cebu, Wessam seacraft is now ready for boarding".

I was aboard the seacraft at around 2:00 pm and the vessel docked at pier 4, Port of Cebu at around 4:10 pm. After getting some information that the trip to bohol is about to leave at 4:30, I rushed to the nearest booth to buy ticket for Tagbilaran city, Bohol. Good timing, as I entered the terminal after checking in, all passengers to Tagbilaran were advised to borad the seacraft. We depart at Cebu around 4:30 pm.

We were at the midpoint of our travel to Tagbilaran when the vessel suddenly stopped. The Captain announced that there were trouble with their propeller. This cause some panic to some of the passenger as observed on their facial expressions because were in the middle of the sea pounded by big waves. It took about 20 minutes until the captain said that we would continue sailing. I thought it would go on but another stop has yet to occur.

Because of these delays we arrived at Port of Tagbilaran at 7:30 pm. I rode a tricycle going to the office and immediately fell asleep due to distant travel.
Labels: bohol map samar